Do you ever regret befriending someone? Part II

Wow. I don’t even know what to say. I haven’t been this annoyed by someone in a very long time. I talked about my “friend” B in one of my previous posts. Since it looks like this whole friendship-thing is becoming a never-ending struggle, I decided to turn this into a fun little series of blog entries. Whoohoo!

You can probably tell that I’m not in a good mood. Why do I always attract the weirdest people? If there’s a room filled with 99 perfectly normal people and 1 utterly annoying person, the chances that I’ll befriend the annoying one are a 100%.

Distancing myself from B

I followed everyone’s advice and tried to distance myself. I sent B a message and told her that I do not enjoy listening to audios (especailly when they’re 1 hour long). I also said that I don’t think friends need to talk to each other every. single. day. I tried to be as polite and nice as possible, since I know that she’s very sensitive and a pro at over-thinking.

I guess being super nice was the wrong move. She actually had the nerve to reply to me with an audio message. Now, maybe thats just me… but if someone tells me that they hate audios, I would freaking stop recording them? And I would feel bad for annoying that person?

Not B though, not B. She hit me with 6 minutes and and 27 seconds of trying to explain that she wants to be my friend and didn’t realise how pushy she had become yada yada yada. A simple “Okay got it” would’ve been enough.

I don’t like having people over. My flat is pretty small and the only thing you can sit on is my bed. I don’t even a big kitchen for cooking, either. Basically there are no fun activities you can do at my place except for binge watching TV Shows and movies. Therefore I rarely have friends at my place and shocker; I hate people inviting themselves over.

Today B sent me a message going “So when can I see your place?:)”.

If I didn’t know any better, I would say she’s one of those fuckboys trying to get into my pants. Is she being serious? How many hints does this girl need?
After I called her out on that she replied with “It was worth a shot ;)” and then she sent me a list of dates when she’s free and asked me to visit her instead.

Guys, I’m this ? close. I’m trying hard to not lose my shit and yell at her to leave me alone but the temptation is getting stronger with every message.

I should probably give Yoga another shot. 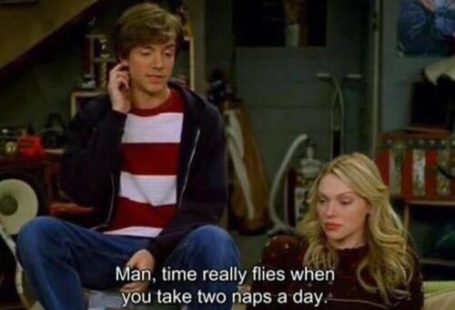 The life changing magic of… what exactly?

10 comments On Do you ever regret befriending someone? Part II